The Scottish Sports Alliance is delighted to announce that ahead of yesterday’s election, all candidates from the five main political parties had signed up to support the VoteforSport pledge. 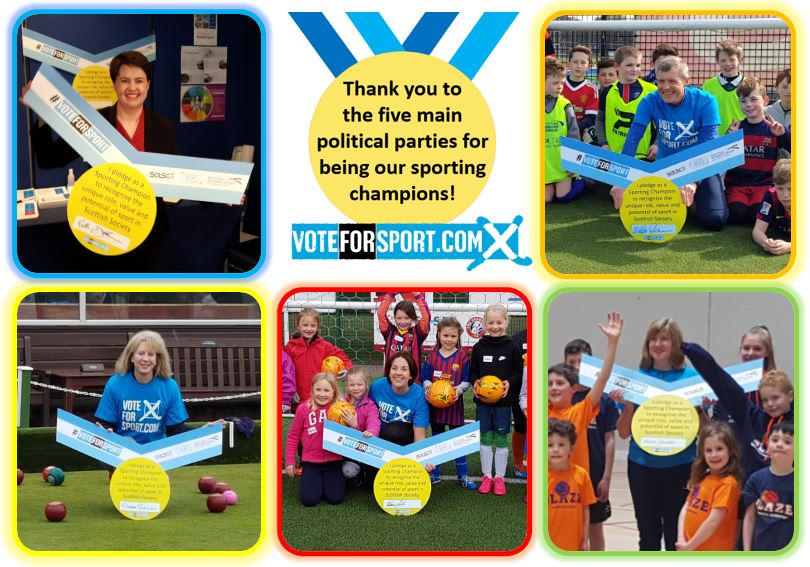 The Scottish Sports Alliance has released the full list of Scottish parliamentary election candidates who signed their VoteforSport pledge via www.voteforsport.com

“I pledge as a Sporting Champion to recognise the unique role, value and potential of sport in Scottish Society.”

The campaign, launched on behalf of the Scottish Sports Alliance, had 417 Prospective Parliamentary Candidates signed up when the campaign closed on 3rd May. The total number of signatories includes all parliamentary candidates running for the five major parties in Scotland (Conservatives, Greens, Labour, Liberal Democrats & SNP) including the support of all five party leaders.

VoteforSport, which followed A Manifesto for Scottish Sport the Alliance’s manifesto for sport in Scotland, was designed to raise awareness of sport in the lead up to the elections.

Kim Atkinson, CEO of the Scottish Sports Association, said “the support for VoteforSport from political parties and individual candidates has been exceptional. This 100% sign up across the five main parties replicates the success of the VoteforSport campaign prior to the 2011 elections and provided a strong foundation for a number of significant developments within sport during the last Parliament. Our members across the Scottish Sports Alliance hope that this success can be replicated for the new Parliamentary session with the importance of sport continuing to be recognised and prioritised.”

In signing up to the pledge each party commented:

Ruth Davidson (Scottish Conservatives) said: "I'm voting for sport in this election because I know the many fun, healthy and sociable benefits physical activity can bring.”

"Playing five-aside football, hillwalking, dancing and boxing are all activities I love and enjoy and it is important we encourage everyone to get out there and get active for the health of our nation."

Alison Johnstone (Scottish Greens) said: "Investment in sport is a key Green priority, as we see the connections between a happy, healthy population, good social skills and a thriving economy. We want to see high quality sport and physical activity provision in schools, and expansion of sports clubs through support for volunteering, accessible facilities and funding to enable everyone to participate. Partnership working is essential.”

"Sport is often overlooked as a means of educating young and old alike and tackling both social and economic disadvantage. Access to local affordable and quality sporting places is key, and safe spaces are vital if we want to address the drop out rate among young girls.”

"Sport contributes to improved physical and mental health, enhanced learning and employability. Cuts to sport are extremely short sighted as this is investment in our national health and well-being. The Scottish Government has cut sport funding from £71.8m last year to £45.8m in 2016-17. Scottish Greens commit to campaigning for a steady level of investment into sportscotland to facilitate long-term planning and support of high-performance sport."

"Sport is one of Scotland's greatest social movements, it inspires and brings together people from a variety of different backgrounds in their shared love of their chosen team or sport.”

"We all look back in great pride when Scotland staged the greatest Commonwealth Games in history less than two years ago, but it's important that we continue to build a lasting legacy from those accomplishments so that future generations and our future gold medal winners can achieve everything they possibly can.”

"We must also invest in sport not only to improve our medal chances, but as one of the primary methods to make Scotland a healthier, fitter and happier nation.”

"Thousands of Scots are members of amateur sports clubs, many of which are run solely by dedicated volunteers.”

"I pledge to do as much as possible to help those volunteers, from the parents who coach the school football team to those dedicated individuals giving up their spare time to do the finances for the local hockey team. Far too often, they don't get the credit they deserve and I promise to be their champion in the Scottish Parliament."

Willie Rennie (Scottish Liberal Democrats) said: “As a keen runner, sport has always been hugely important to me personally and it brings huge benefits to Scotland. Sport is about fun and friendship, it is about bringing people together and helping keep Scotland healthy. I am pleased to sign up to VoteforSport.”

Shona Robison (SNP) said: "I am delighted to sign the pledge to VoteforSport. As Secretary for Health, Wellbeing and Sport I have been heavily involved in promoting the value of health to the individual whether young or old and to the community.”

"We have worked hard to build on the legacy of the successful Commonwealth Games.”

"Sport improves health, social activity and community cohesion and it's good fun too."
Kim Atkinson further commented; “As Scotland goes to the polls the next 4 years will be crucial. The last Parliamentary session witnessed the most successful performance cycle for Scottish sport, through the 2012 Olympics and Paralympics and the 2014 Commonwealth Games, along with successes across many sports in increasing membership and volunteering at the grassroots of sport. We must celebrate and continue to build upon these successes.”

“VoteforSport has been hugely successful and the endorsement for sport from each of the parties is vital in providing a strong consensus that sport matters to Scotland. With so many candidates signed up to VoteforSport, sport has never had a stronger voice or mandate in Scotland. With almost one-fifth of Scotland’s population in membership of one of 13,000 sports clubs the VoteforSport campaign provides an opportunity for this enormous community of interest to be appropriately recognised and to have a voice in Holyrood.”

“Our WhySportMatters resources, which supported the campaign, will continue to be vital as from May 6th the Scottish Sports Alliance and the general sporting public will be responsible for supporting and ensuring our elected Sporting Champions deliver on their pledge. We will need to continue to work in partnership throughout the next 4 years and beyond to truly deliver a world class sporting system for everyone in Scotland.”